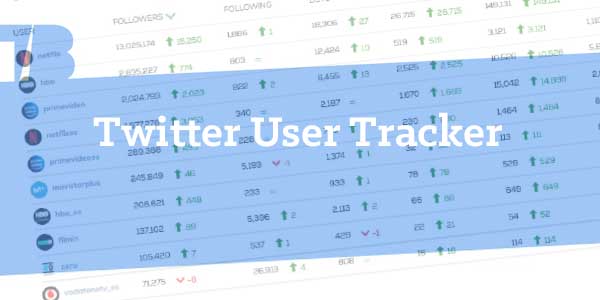 This post is also available in: Français (French) العربية (Arabic)

If you have clients who have a presence on Twitter (your own company is also valid), you will need to know how they are doing and what’s the evolution of their main KPIs (followers, following, list, etc). We like to start our posts like that, with an obvious or impactful sentence, in this case we will add another obvious one: you need to track your client’s information on Twitter. Have you presented any report to your client/boss showing Twitter analytics and followers’ growth was the most important KPI? In this post we will talk about Twitter follower tracking and how you can use a Twitter follower tracker to present the info to your client and compare it with its competitors.

Disclaimer: Followers are important, there is now doubt about it, but we will also talk about other metrics that are very important too, for example the number of mentions the account received. Tracking Twitter users is as important as tracking and creating Twitter hashtag trackers, but it has its peculiarities.

But since clients consider it important we must learn how to track Twitter followers too in this post. Clients look especially at the number of followers of its competitors, so when its Twitter followers are lower than its competitors you will surely receive a call. Followers analysis is something that every social media manager should be doing, it seems obvious as well. As well as you perform a followers analysis you should be doing the same for other important metrics.

What is a follower tracker?

The Twitter User Tracker system is a unique tool included in Tweet Binder. This new system allows users to get Twitter accounts’ information, to compare data between users and to keep data records about many key metrics. It is a complement to the Twitter analytics that Tweet Binder offers for hashtags. You may have found yourself more than once wondering about a twitter follower tracker app or, why not, about how to track my Twitter followers.

Well, now thanks to Tweet Binder Tracking Twitter Users is possible and easy. The are three aspects we have to clear before we continue:

What is a tracker?

As we have aforementioned, a tracker is the name we give to each Twitter user we want to analyze. To set up a tracker we must follow these steps:

How can I create a tag?

A tag is like an identifier. Tags server to unify trackers into a common group. For instance, if we create trackers such as @netflix, @hbo, @primevideo… the tag we will use to unify them would be, for instance: “streaming platforms”. We can create as many tags as we want and a tracker can be part of different tags.

The Tweet Binder “My trackers” menu includes the option to create a “New Tag”. By clicking it we can add a new one. The same applies to the “My trackers” button which is the one to create them.

As you just saw there are many stats we can analyze from a Twitter user, not only its followers, which actually can be bought you know. To choose the most important or the two most important Twitter user stats from the list will be difficult. However, since you asked we must say:

Setting a Twitter follower tracker is very easy with our new tool and it will be great to manage your twitter followers. Tweet Binder is releasing a new tool that will track Twitter users easily. The most important thing is that this new tool will focus on the two major aspects we talked about before:

The steps to start will be very easy:

Once we set these easy steps, the system will start gathering the data everyday and will be showing the info on a private dashboard. The Twitter follower tracker is set in just a few steps! Evolution and comparison, that’s the key, not only for followers analysis but for all the other metrics. We will be able to present a 360 degrees dashboard that tracks all the important KPIs.

There is a Twitter follower growth graphic included in the tool. Once you add a tracker, the data is updated every hour and a Twitter chart displays all the available information. Even though this chart gives a lot of information, there is also a visual graph where all the metrics are displayed. Followers’ growth is the one shown by default but you can select between all the stats in the chart (number of mentions, lists, tweets, etc…). The date range of analysis is modifiable as well. This is the dynamic graph with Twitter user data you were looking for:

Once we have seen how to analyze users and configure our Twitter follower trackers, we must learn to detect those accounts that we want to analyze. It is very easy to find our competitors. However, what about those accounts that may be competitors and we do not know? At Tweet Binder we analyze millions of tweets, images or opinions creating very complete reports. Its data can help you detect possible new trackers and obtain very complete data.

Among them, the Twitter users rankings stand out. They are valuable information to be able to better know those who interact with our campaign or brand. Even to assess whether we should have them closely watched. Not only by following them, now with a tracker you will have all the information accessible quickly and completely. Remember, Tweet Binder plans no longer only analyze tweets or hashtags, now they also allow monitoring accounts and data evolution of Twitter followers.