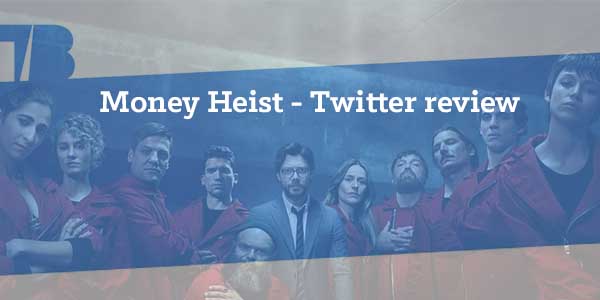 If we talk about Money Heist you probably have something in your mind. Maybe a song, such as Bella Ciao. The name of a city, like Nairobi. Or, why not, the face of a famous painter; hello, Dali masks. One undeniable place to go when we think about any TV series is Twitter. Your imaginary of the series may be wide but the place where you express yourself about it is Twitter. Because fans and curious people rely on social networks to look for clues, share ideas or even to, sadly, read some spoilers. The release of the fifth part of the Spanish series is a huge matter worldwide. Thus, this post is based on Money Heist Twitter data. No spoilers ahead!

Let’s star by saying that we have created several Twitter reports and analysis in order to write this post. From Twitter historical data to a Twitter account report about @lacasadepapel. There are million ways to approach how #MoneyHeist has impacted Twitter. In fact, you can have your own approach to it. Nevertheless, these are the keys aspects we consider relevant to post about.

The series that started as a Spanish production for a national television channel has grown into something huge. It went from Antena 3 to Netflix Spain and the Twitter account was modified as well. The first Twitter handle was @lacasadepapelTV. A Twitter user that still owns over 465K followers, although it is no longer the official one. In fact, 2018 is the year when Netflix took charge of the series and when @lacasadepapel became the main Twitter account.

Money Heist Twitter data is not available until July of 2020. We have to remember that the show started as a Spanish production so the Twitter account mainly shared tweets in Spanish with #LCDP (aka “La Casa de Papel” the Spanish name of the show). Thanks to the Excel file we can download with the Twitter analysis, we are capable of telling that this is the first tweet  @lacasadepapel posted with the hashtag #MoneyHeist in Twitter:

Not only that was the first tweet but thanks to the Twitter account analysis we also know that there are 16 tweets with #MoneyHeist in the @lacasadepapel timeline. However, there are 102 with #LCDP5.

Using the Twitter Advanced search commands we came up with the results we were looking for. In our aim to find out the impact of #MoneyHeist in Twitter, this is the search we have performed: #MoneyHeist -RT since:2021-09-01 That is to get all the original tweets, not RTs, and to get tweets since the first of September. The Twitter report’s timeline, in fact, shows how the real activity started when the show was launched: the 3rd of September 2021

The timeline shows over 60K original tweets with #MoneyHeist. The number of retweets is huge. Moreover, these are the top #MoneyHeist Twitter stats:

Additionally, we can point out that not Netflix nor Netflix Spain own the most liked tweet about #MoneyHeist:

Suit up. It’s going to be one hell of a ride.#MoneyHeist Part 5 Volume 1 is now streaming in English, Hindi, Tamil and Telugu. pic.twitter.com/eSfM2uqKMI

Another interesting fact about #MoneyHeist Twitter data is related to the characters. Among the top 10 Twitter accounts mentioned with #MoneyHeist we find two well known Twitter handles. They are ‘The Profesor” and “Tokyo” or as the Twitter fans know and have well mentioned: @alvaromorte and @ursulolita are the most mentioned characters of Money Heist in Twitter.

Thus, we are not here to tell more than we must. We just can not wait until the second volume of this fifth season is released. Meanwhile, we are going to madly share #MoneyHeist Twitter content until December comes:

So now it is your turn. If you have not watched the season already, contact us once you have done it and we will share more Twitter data. Also, if you have binged-watched it (as we have) reach out to us so that we can share some valuable information about some of the characters. Oh! And if you want to include great Twitter videos or GIFs in your tweets, you can try our Twitter Video Downloader! Suit up your tweets, it going to be one hell of a timeline! 😉