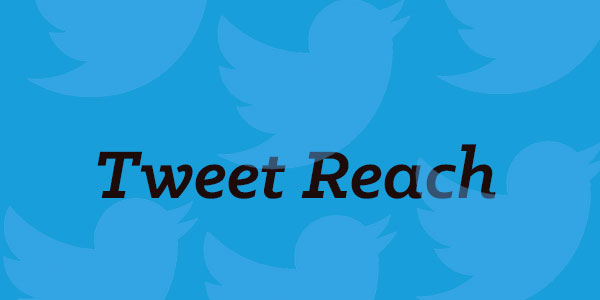 To learn more about how to calculate the tweetreach of a hashtag you can keep reading this post, but if you want to jump directly to the action and start experimenting with Tweet Binder’s tweet reach calculator click the following button:

The reach on Twitter is one of the most important Twitter Analytics because it shows how many people knew our hashtag or tweet. Talking in TV language it will be the audience of our hashtag, in fact many TV shows started years ago to measure their audience with Tweet Binder.

How to calculate the Tweet Reach of my hashtag?

There are basically two ways to calculate the tweetreach of a hashtag or keyword (or tweet):

Let’s remember, the tweetreach (aka simply reach or Twitter reach) is the number of people who saw the hashtag or tweet. In this case we will explain how to calculate it manually, which is actually a waste of time because we have tools like Tweet Binder that do it for us, but it will show us in detail how it is calculated. Example:

Imagine that we launched a campaign with a hashtag called #MyProductRules (Our product rules yes, but that hashtag is not real) and we encouraged people to send tweets using it so we gain exposure. Ok. Let’s imagine that we collected 6 tweets (Yes, it’s a very low number, but this is just an example) that were sent by 5 people:

In the case of the tweetreach, the number of tweets doesn’t really matter. If you send 10 or 1 tweet it will be the same because the reach is based on your number of followers. Ok, so to calculate the reach of our hashtag we will just sum up all the followers of the people who sent the tweet, the final figure will be 7,500 people, our hashtag #MiProductRules got a reach of 7,500 people, an audience of 7,500 Twitter users.

There are tools like Tweet Binder that do the tweetreach calculation automatically and save a lot of work to Social Media Managers. Imagine that you have to manually calculated the tweetreach of a Trending Topic on Twitter, you can get crazy. So, don’t worry, there are tools that do this job for you. In this case we will explain how to calculate the Twitter reach of any hashtag using Tweet Binder. This free twitter reach analysis can be started at anytime from Tweet Binder’s webpage.

After that, we will be taken to a Twitter report where, besides many other stats, we will be able to see the tweetreach. The Tweet Binder reports have very useful charts with Twitter data.

Why do we say “potential” reach?

The tweetreach is something that cannot be exactly calculated due technical issues related with the access to Twitter data trough the Twitter API. We cannot access all the list of Twitter followers of an account, just the number, so we cannot know firstly how many followers two accounts have in common because in that case the reach will be not 2 people but 1. Also, we have no way of knowing if all the followers of one account actually saw the hashtag, maybe they were having lunch or just sleeping.

Those are the reasons we call the tweetreach “potential” and we always assume that it is the maximum: not followers in common and everyone seeing the hashtag. The important thing is to measure the hashtag always the same way, so we can compare the figures correctly.

The answer to this questions is simple: yes. Twitter impressions are defined as the potential number of times someone could have seen the tweet with the hashtag. There is actually no way of knowing if someone has effectively read or not the tweet. Only if you go user by user asking if they have done so you will know it. So that is why impressions, as the tweetreach, are potential. Even though they are potential, impressions are a good way of knowing how the campaign has behaved on Twitter. The higher the Twitter impressions are, the higher exposure your campaign has had. But, do you know what’s the difference between impressions and reach? Let’s see it briefly.

It has been remarked in the beginning of this post but it is important to bare this in mind. These two concepts always go together but they stand for different things. Whereas impressions stand for a number of times, the reach stands for a number of people. So, it is common that impressions are higher than the reach. Why is it so? Because many users post more than one tweet with the analyzed hashtag. By doing so, they increase their impressions as the exposure is higher. But the reach remains the same as they have the same number of followers. In line with this, the reach will slightly change if an account has gained followers in the time between tweets posting.

Getting the best Tweetreach with the Twitter Advanced search

The Twitter advanced search is one of our favorite features on Twitter. It allows you to search for “antique” tweets or to filter hashtags by date, type and more. For example, to search the most retweeted tweet of a campaign. Once we use the advanced search, our reports will be more accurate and the Twitter reach of them all will be more exact. If we want to measure, for example, all the tweets that mentioned one specific account because it had a crisis one day, using the advanced search operators we can get the tweets and the tweetreach only of the day of the crisis, being able to take action with more accurate data.

Now that you know everything about Twitter reach, it is your time to try it yourself. No matter if you want to analyze top Twitter accounts or just get Twitter sentiment analytics. With Tweet Binder you can create a report for FREE for the last 7 days. One of the metrics included in this free report is the tweetreach. So, go for it and get your Twitter stats.