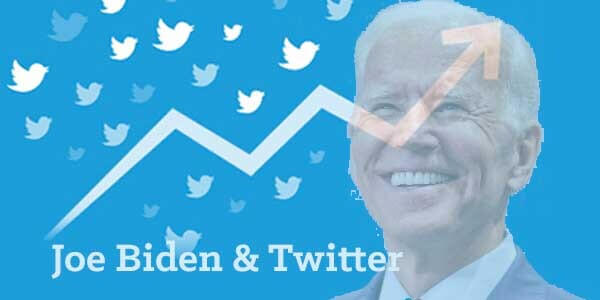 2020 was an awkward year. It almost seems hard to think about what it has left for us. And what the new days of 2021 are bringing into the new year… We are not only going through a global pandemic but there are heavy fires, film a-like explosions, exceptional events as well. In addition, major events have been and are being canceled or postponed. However,  Joe Biden’s Inauguration day was impossible to be cancelled or delayed. Nor Joe Biden’s Twitter activity. Thus, we can say 2021 has a lot to offer. For good or not.

As we already count with a post about Twitter and Trump, we are going to analyze how does Joe Biden use Twitter. Also, some statistics of Biden on Twitter. Of course, let’s start from the beginning. Who is Joe Biden? You may be thinking (not all of us live constantly checking the news or Twitter). Let’s get it short from Wikipedia:

Joseph Robinette Biden Jr.  born November 20, 1942) is an American politician who served as the 47th vice president of the United States from 2009 to 2017. A member of the Democratic Party, he served as a United States Senator for Delaware from 1973 to 2009. Biden is the Democratic presidential nominee for the 2020 election, running against the incumbent, Donald Trump.

Or to check his complete and well explained story, we have the main source: his official website.

The US Presidential Election Day arrived. Twitter was heavily used to comment it. But, did Joe Biden tweet about it? Of course, Twitter seems to be an accepted political “weapon” these days. And we are analyzing the tweets @JoeBiden is sharing constantly. Joe Biden tweeted 125 original tweets (RTs excluded) only in November. This is Joe Biden’s most liked and most retweeted tweet from those days:

And this one the most expensive one from that time:

Together, we can end the last four years of chaos.https://t.co/eoxT07d7QB pic.twitter.com/V2EMJnkqSC

However, @JoeBiden is not using any hashtag with his tweets. He tweeted the word “election” 12 times and “Trump” 34 times on the 125 tweets he shared since the 1st of November 2020.

There are numerous ways to search for the first tweet that Joe Biden put into Twitter. The hardest and probably the most tedious would be to scroll all the way down into his timeline. Another one could be by using the Twitter advanced commands. But, why not use a Twitter tool like Tweet Binder that allows you to analyze old tweets. So, thanks to a Twitter Historical report we are certain that Joe Biden’s first tweet is from 2007. In fact, this was Joe Biden’s first tweet:

But, how many tweets has Biden posted since October 2007? As of today, 18th of March 2021, the total original tweets in Joe Biden’s Twitter timeline are almost 6.5K. From those tweets and thanks to our Twitter account report, we can find out which are the most liked and most retweeted ones from @JoeBiden’s original tweets. Actually, this is the one tweet that has highest number of retweets:

America, I’m honored that you have chosen me to lead our great country.

The work ahead of us will be hard, but I promise you this: I will be a President for all Americans — whether you voted for me or not.

I will keep the faith that you have placed in me. pic.twitter.com/moA9qhmjn8

However, a complete Twitter analysis from @JoeBiden’s activity shows up that practically all of his tweets are retweets. Against those 6.5K original tweets our Twitter complete report has tracked over 20K0 total tweets (retweets included) since Joe Biden opened his Twitter account. These are the hashtags he has ever shared most:

And this is the second most liked picture Joe Biden has ever posted to Twitter:

I’m Joe Biden and I approve this message. pic.twitter.com/TuRZXPE5xK

It’s now 2021 and Joe Biden’s inauguration day arrived. The 20th of January marked the day when Joe Biden became the US President. And that has also its relevance in Twitter. The account he used to manage was @JoeBiden but the 14th of January he announced the transition to @PresElectBiden. And now, as the President of the United States of America, Twitter has transferred the  @POTUS account to Joe Biden. He has shared over 560 original tweets since he owns the account and the Twitter profile already has over 10.1 million followers. This is @POTUS most retweeted tweet so far:

There is no time to waste when it comes to tackling the crises we face. That's why today, I am heading to the Oval Office to get right to work delivering bold action and immediate relief for American families.

And this one is the Joe Biden’s most liked tweet, well, @POTUS top tweet by likes so far:

We're back in the Paris Climate Agreement.

Joe Biden’s Twitter activity during 2020 has been quite interesting. There are over 3.3K original tweets sent from his Twitter account. In fact, there is a peak when he announced that Kalama Harris was the one elected to be Vice President. And a recent one after the recent vice presidential debate:

This is Joe Biden’s most expensive tweet in 2021. This is a unique metric in Tweet Binder’s PRO reports:

Head to https://t.co/gRX1fGFEzj to find a plan that works best for you. pic.twitter.com/Xv4Or7PsYu

In addition, something relevant we find while analyzing the data provided by the report is the sources he tweet from. Most of Joe Biden Twitter data is from TweetDeck and Twitter Studio. While Trump tweets were sent from an iPhone source. There is something that may point out to a Communication management and Social Media plan from the Democratic side. Whereas Trump tweets are usually sent from an iPhone (probably sent by himself), Biden’s tweets are likely to be more structured. In fact, he now has an official account that will likely serve for institutional meanings: @Transition46 (announced on the first @PresElectBiden tweet).

If you need more information or you want to create a report analyzing what President Joe Biden has tweeted today, welcome to our search box: Please, write from:@POTUS