Lots of things have been going on around Twitter these days. And the biggest of them all is the purchase of Twitter by Elon Musk. As a result of this transaction, Twitter will become a privately held company. As a Twitter analytics platform we needed to analyze the performance of Elon Musk on Twitter. How has  this all affected Elon Musk’s Twitter account? Let’s dive into some of the main stats. 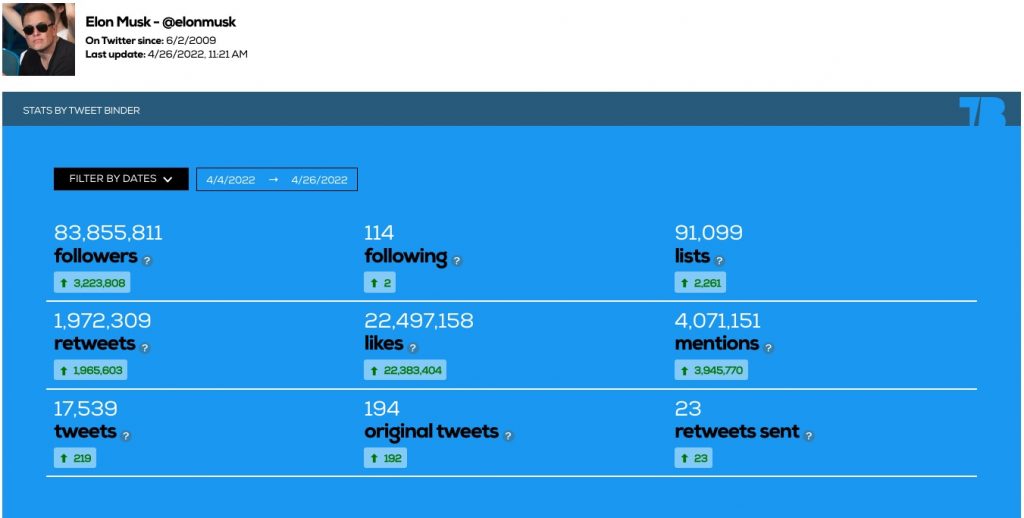 This image shows that Elon Musk has gained more than 3 million followers since April 4th until April 26th. It is not surprising that his Twitter handle has almost 4 million mentions. Main stats are:

From those tweets 192 are original tweets and 23 are retweets. If we add the number of original tweets and retweets he has sent we obtain 215 tweets. Which is less than 219. What does this mean? It means that Elon Musk has posted 4 tweets that he has later deleted. We can not know the content of those tweets, but we can know that he deleted tweets after being shared.

As we can see, the accounts he has started to follow are @neuralink and @beeple. The latest is a graphic designer from Charleston. Neuralink is a neurotechnology company that develops implantable brain–machine interfaces and aims to help people with disabilities and connect humans and machines. This company was co-founded by Elon Musk. We have also check if Elon Musk follows Parag Agrawal on Twitter and yes, he does.

With a Tweet Binder Twitter report we can easily get Musk’s recent tweets. Not only the number of tweets but the the impact and figures they make. In fact, thanks to a Twitter 7-day report we have access to these complete @elonmusk Twitter dataset:

I hope that even my worst critics remain on Twitter, because that is what free speech means

From buyer to one of the top Twitter accounts: Elon Musk

As Elon Musk, we also believe in the potential Twitter has. It is the go-to place to check the latest news about everything. We have been analyzing Twitter data for over ten years and we are proud to say that this social network is now more alive than ever. With Tweet Binder you can know how many tweets a hashtag has or how much your Twitter account is worth. But, as mentioned in this post, you can now know the performance of any Twitter account. Know who has started following whom on Twitter and detect who has stopped following anyone. Want to know more? Let’s talk!