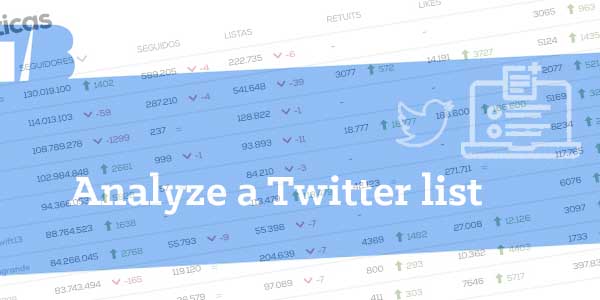 Twitter is a huge universe. Lots of people consider it just a social network. However, here at Tweet Binder we have written enough posts to prove that wrong. There are many factors and details that usually go unnoticed. One of them are the Twitter lists. We have to say there was a time when they were more visible than now. Or, at least, more fashionable. This feature can be featured in the how to organize Twitter section.

Anyway, they are still an important part of Twitter. In fact, there is a post about how to use Twitter advanced search. This post could be part of it. But are determined to give credit to the not-so-known Twitter lists. But, let’s start with the basics.

We could give you an explanation about how to search Twitter lists and what they are. But Twitter itself describes them perfectly:

You just have to click its icon and then select the plus option. The mobile version is a bit clearer than the laptop one. But it is pretty easy. Then, Twitter asks us to add a name and a description to our list. Additionally, we can even make them private. You know, in case you want to keep it low key.

We recommend you to try it for yourself. Create and edit lists. Find out which accounts you want to have in the same timeline and enjoy how useful they are.

As we have said, a Twitter list groups users under a certain topic. Some lists have tons of users and more interesting than what they tweet is seeing their evolution. With the Twitter User Tracker we can see their follower growth or mentions growth among other metrics.
These are the steps to analyze a Twitter list:

How to create a tracker

We have already dedicated a post to explain this step. Therefore, we won’t repeat all the information here. We’ll just point out the main features.
A tracker is the account we want to analyze. So, each account in the twitter list is a tracker.

To analyze a list we need to create tags. A Twitter tag is made to group users using different criteria. For example, if we were to track Taylor Swift and Katy Perry on Twitter we can create the tag “Artists”. As we can see, this works as a Twitter list.
If we have a Twitter list with all the NBA players, we can just download them and create one user tracker for each player and group them under the tag NBA players.

We have created a tag named “Most Followed” which groups the most followed Twitter accounts. This way we can keep track of their Twitter evolution. In the picture we can see how, for example, Ellen Degeneres has lost 12K followers while Arianna Grande has won 42K followers.

When we create a tag with the Twitter User Track tool we can access different sections. The tag file is organized so that users can see the information divided in three parts:

No matter if it’s out of curiosity or because you have discovered these lists are really useful, try to create and analyze a Twitter list with Tweet Binder. With the Twitter User Tracker feature you will be able to see how they evolve and detect any change in the metrics. If Taylor Swift gains 10K followers in a day you will be able to see it. Also, if Barack Obama receives more than 20K mentions in a day you can analyze why.