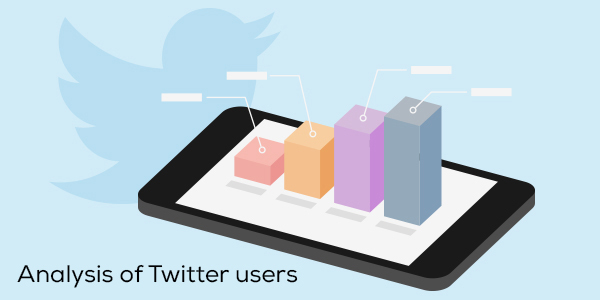 A big part of Twitter comes with the amount of data anyone can get from it. Yes, our tweets, our profiles,… Anything can be turned into data. That is why getting to know the basics of Twitter Analytics is crucial for any marketer or anyone interested in statistics. Twitter content is made by users, therefore each user needs to have a Twitter account. Tweet Binder has a product that analyzes the activity of any Twitter account. With just a few clicks you can get a report with all the original tweets and retweets sent by a user.  Do you want to know how to run an analysis on a Twitter account? In this post we will show you how.

In fact, we have already posted about how to get the most retweeted tweets out of a topic. Or even how to calculate Twitter impressions. What’s more, Tweet Binder offers the sentiment analytics of Twitter hashtags the tool monitors. However, this post is going to be focused on the importance of the analysis of Twitter accounts.

A Twitter user is the name anyone gives to its account. It starts with an “@” and it can contains letters, numbers and _ or -. Every Twitter user name is unique, there can not be two equal accounts. A Twitter account must have a name and a user name.

The user name lets other users tweet you or look for you. It allows you to tweet. It is your identity within Twitter. The number of tweets or the followers you have are some of the details anyone can track. Well, that in case the Twitter account is not private (in that case nothing can be done). Let’s focus our post using @jk_rowling as example. (Big Harry Potter fans over here).

The name Tweet Binder has given to these reports is “Twitter Account Report” also known as TAR. This report is basically a Twitter account archive of tweets. After analyzing all the tweets sent by that account the report gives information such as the creation date of the account, its most mentioned users and even its economic value. Of course, it also collects all the tweets sent by that account.

The best way of learning about it is by going through an example. At Tweet Binder we are huge fans of Harry Potter, that is why we will use JK’s account as an example to see the information included in the analysis of a Twitter account.

In the image above we can see that JK Rowling created her Twitter account on the 3rd of August 2009 and waited until the 24th of February 2011 to send her first tweet. It is quite possible that she may have sent some tweets between 2009 and 2011 but maybe they have been deleted. An interesting figure that this report gives is the number of Twitter lists this user is included in. JK Rowling is in 33,352 Twitter lists, which is a really high number.

A really cool thing about her is that more than half of her tweets (59%) are original. This means that she does not retweet the whole time. She takes the time to write and send her own tweets. In fact, JK Rowling is known for sharing her opinion on Twitter with no hesitation. She knows some people are not going to like what she says but she is not afraid to speak out.

As we have said, the Twitter Account Report does an analysis of a Twitter account. Therefore, creates an archive with all of the tweets from that account. Tweet Binder reports can be exported to an Excel document giving its users the opportunity to work more efficiently with the information. This spreadsheet collects all the stats shown in the web report and its classified in different tabs.

The spreadsheet includes a tab named “Hashtags”. This is both useful and interesting at the same time. We can sort the tweets by the number of tweets sent with each hashtag and we will discover which is the most used hashtag by that account.  These are the most used hashtags by JK Rowling.

How to see someone’s first tweets

Thanks to these reports, we can see the first tweets an account has shared. In fact, this is one of the many new metrics included in the Twitter Account Reports. One way of seeing the first tweets is by going to the spreadsheet aforementioned. However, they can be consulted from the website as well. The web report has a tab named “Tweets”. If we access there we will see all their tweets displayed and we can even create binders to sort the information. This is the first tweet shared by JK Rowling.

This is the real me, but you won't be hearing from me often I'm afraid, as pen and paper are STILL my priority at the moment.

When analyzing a Twitter account, there are several factors that need to be considered. For example: do you need to see all the tweets sent by one account? Or do you just want to see its original tweets? Do you want to exclude the retweets from that analysis? Well, with Tweet Binder you can do all of the above.

The only thing you need to be a master of is of the Twitter advanced search. With its commands you can filter your search by type of tweet, by date or by language, So, imagine that we just need the original tweets sent by JK Rowling, we just need to type in the following search box this:

Following the example we have mentioned, we are going to run a report for the latest JK Rowling tweets. We hace created a simple 7-day Twitter report. However, we could create a Twitter historical report to see all the tweets sent by he Harry Potter writer.

When analyzing a Twitter account it is important to focus only in the tweets that account has sent. That way, we won’t loose the focus on what we are analyzing. If we need to know how many RTs the user has received, we can do it with the Excel exportation. Tweet Binder is capable of turning Twitter data into Excel sheets. In that document, we give the number of retweets and likes each tweet receives.

If you want to see all the tweets sent by an account, retweets included, you just need to type this: from:@jk_rowling.

Apart from the details that are required to join the social network, there are statistics and data to easily analyze a Twitter profile:

There are additional facts that can be part of a Twitter profile such as the birthday or a link. But another important one is the profile picture. When we create a Twitter account picture of an egg is the image we get. We can say that those who remain with an egg as a Twitter profile picture are not really worth following. It also happens with those that don’t really show themselves.

In the era of Twitter bots, a Twitter profile with a good profile picture, a nice description and a relative balance between followers and followings give us a good analysis of a Twitter user.  Well, that’s not applicable for popular accounts such as J.K. Rowling. For popular accounts always rely on the Twitter verification mark.