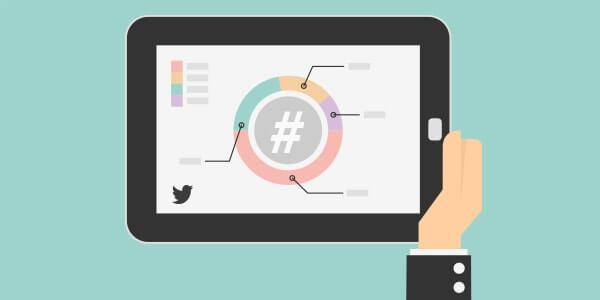 Nowadays Social Media, mainly Twitter and Instagram, are full of marketing and advertising campaigns. These are mainly limited to just post something on Twitter or Instagram using a hashtag. Agencies or companies simply do a Twitter report or an Instagram hashtag report. Even though there are campaigns that are much more than this most of them are just left like that. They don’t go further. Maybe they don’t do anything else because they don’t want to, don’t have time or just don’t have new ideas. Or they don’t really value and take into consideration the power of hashtags.

The hashtag character was tweeted for the first time on the 23rd of August in 2007. Since then, the trending topics, conversations and tweets have become part of our daily life. According to Twitter, an average of 125 million hashtags are daily shared. This huge amount of information has to be ranked. For that reason, it is really important to know the hashtag analytics of our campaigns. It doesn’t matter if your campaign took place within this 10 years. Tweet Binder can run Twitter historical reports with no date limitation, have that in mind when you read this post.

how do you feel about using # (pound) for groups. As in #barcamp [msg]?

How to use hashtags for business

All companies want to launch successful publicity campaigns. To launch them is easy. What is really difficult is to correctly choose how to do it. Most companies ask themselves the same questions: “What media should I choose?”, “How can I ensure that people participate actively?”, “Will my effort be worth it?”, “Will people get to know me better?”.

From Tweet Binder we have already spoken about turning campaigns into interactive tools. But we’re not talking about that today. Nowadays it doesn’t matter what media companies choose, all campaigns have one thing in common. They all include a Twitter hashtag or Instagram hashtag. “What for?” you may think. It’s a perfect way to ensure that your audience gets involved. Customers will use it and talk about it. Good and bad things will be said. Don’t panic! 😉 It is unnecessary to say that you should run a Twitter or Instagram report for the Twitter hashtag of your campaign.

It’s not only necessary to analyze hashtags, we also have to learn how to use hashtags. That means: use the right one, not too much and for the right purposes.

The first reason why you have to trust Tweet Binder is that it offers not one but two reports for every search. The Twitter advanced report contains the main data of the Twitter hashtags tracker and it’s visually attractive. Therefore, the advanced report compiles all sort of data that you may need for a deep analysis.

These are some Twitter data included in this report:

As you can see, from all the tweets shared to the complete list of Twitter users, you have it all. Then, we can access the Twitter basic report. This Twitter report show the main Twitter statistics. It is really useful in case we need a snapshot report. In fact, is enough if you need basic statistics. The number of tweets, the number of retweets, how many accounts have tweeted… All the main statistics are included there. Besides, you do not need to ruin you in order to get a Twitter report. Our social media analytics tool includes also a free version. Our analytics tool include two reports too with this option. That is quite complete.

A second good reason is that if you are a data lover: Tweet Binder is a mine gold. Not only we include statistics and rankings on our reports but we also include graphics. And, what’s more, a navegable date range timeline.

Once you launch your campaign you will see people participating. They are using you Twitter hashtag. Congrats! It is a good way to start.

How long are they going to use it? It depends on when will your campaign end. It may last for a week, a few days or even a month. This is when the problem often comes up. Most people think: “And now… What?”. Here’s the solution. From Tweet Binder we offer many different options which may fit your campaign. It really doesn’t matter what type you have chosen, we are able to analyze the information. Our Twitter reports will give you and your company valuable information. Thanks to that you will be able to see how far your Twitter hashtag has gone. You’ll see, for example, the number of tweets per hashtag.

Is the number of tweets important?

What is really important about the tweets sent is the information we obtain. Our Twitter reports give the same type information regardless of the amount of tweets you want to analyze. What does this means? This means that your Twitter reports will always contain the same amount metrics. This metrics adapt to the number of tweets being analyzed. Here’s an example of an Infographic report done by Tweet Binder.

Instagram hashtags reports are not less amazing with Tweet Binder. If the Twitter data that we analyze are spectacular, Instagram reports are very complete too. Firstly, the are fascinating at first sight. It is easy to understand every number and data included on the report. There are even tips that, by putting the mouse over the figures, explain what they mean.

Secondly, added to the statistics and global numbers obtained about the hashtag there are also rankings. Rankings of users that helps detect those most active or most popular. These users rankings are really useful fro influential marketing campaigns. Detecting influencers is easy with the Instagram hashtag tracker report. In addition, there are content galleries that allow to easily access the most commented, most liked and most valuable publications within the report. That to say: it is really easy to find out relevant accounts or the main publications of the report.

Are you looking for the perfect analytics tool?

No matter how big or small the social media campaign is, it should be mandatory to monitor it. Getting into details and data may seem complicated. And let’s be honest, sometimes it is. However, there are key metrics that have to be considered in order to value our campaign. In fact, to make informed decisions. We should not find any more excuses not to analyze hashtags or social media publications. Not when Tweet Binder is a reliable analytics tool to set up hashtags trackers for Instagram and Twitter hashtags. Do not worry, you are not alone. We are going to explain in this post our Twitter and Instagram hashtag reports. Do not stop reading, you are going to become an (even) bigger Tweet Binder fan after reading this post.

Data exportation, as mentioned, is another important part of Tweet Binder. Actually, with the PRO reports, every tweet and publication can be exported. First of all, the Twitter report data can be downloaded into an Excel file and also into a PDF. This way, working with the data is easy with the Excel and publishing and sharing the report’s result is possible with the PDF. Specifically, the Twitter Excel file is divided into these tabs:

Take your time once you open one of the files, they have way too many information. It’s so valuable and complete that you will love it. Because, with the exportation data you can access the information but also have the visual report: you and your client will be happy.

The importance of interacting with your audience

Hundreds of thousands of reports have passed through our system. We have seen campaigns that have generated more than 10,000 tweets and campaign that merely made it to 500 tweets. This does not mean that the second type of campaigns are badly performed or not communicated well. It just means that they have not interacted correctly with its audience.

Making the target a necessary and relevant part of an advertising campaign is the key for it to succeed. People like to feel that their participation is essential for the campaign they are taking part in. Agencies can do this in many different ways: they can give away some prizes, promise users that they will win something if they RT and like a tweet, and many other things. But that is not necessary; there are other ways to put the spotlight in the public rather than in the product or campaign.

Let you audience take part in the campaign

Thanks to Tweet Binder’s unique technology something as simple as a marathon can be turned into a competition between the North and the South of a country. A motor race can start a contest among the pilots’ fans to see which one wins and much more things can be done. The truth is that, based in our experience, the more you involve your users, fans or audience in your campaign or contest, the more repercussion you will get on Social Media. That can be easily done thanks to unique hashtags and the right promotion of them.

By designing a microsite, iframe or landing page you will be able to save a spot for the posts with the clients’ opinion about your product or service. This will encourage them to tweet and post about it because they will want to make it to the timeline. But you can go even further, you can turn the microsite into an interactive tool and let users vote and participate from the page. You can do this by installing some buttons on different places of the site that will allow users interact with it or you can put some sort of “games” so that they can play around with the data. Hashtags lead the way to success in these interactive social media solutions.

As you can see, campaigns are easily turned into interactive tools thanks to hashtags. You do not need to install anything in the main square of a city or block a metro station; you can just create a site that users can visit when they are in the subway, at their homes with their tablets or whenever they are using an electronic device.

We hope you are still reading. Because we are happy to have you here and to encourage you to discover more about the power of hashtags. We know that understanding data can seem overwhelming but we mean it when we say that you are not alone. There are no limit when analyzing Twitter data. It is possible to settle up a hashtag tracker, keywords analysis or even links research. Plus, any tweet from any time can be analyze.

Go and set up some hashtag tracker with Tweet Binder, we await your contact in case you need assistance.