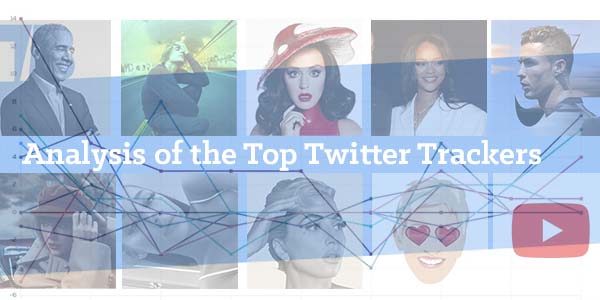 Who has gained more followers: Rihanna or Taylor Swift? Do you want to know how many followers Ariana Grande has won in the last couple of weeks? Tweet Binder has set a Twitter trackers for each one of the top Twitter accounts. It is really interesting to see who has tweeted the most or who has receive more tweets. Before reading the post have a look to the list of accounts and try to guess who has been more active on Twitter. Let’s see the results!

We have already written a post about the accounts with more followers. You can go there to check more information about this topic. Here we will only list them:

By setting a user tracker for each one of these accounts we can keep track of their followers growth and other metrics. Each Tweet Binder plan includes a set amount of trackers and tags for you to analyze and group Twitter accounts.

After setting a tracker for each one the accounts we have group them under a tag named “most popular”. This way, we can compare their increments and their variations. First, we will focus on who has gained more followers in a given time period (9/14/2021 to 10/10/2021). Creating a Twitter follower tracker is key for this.

It is interesting to see how these accounts also stop following other accounts. We tend to think that they do not use Twitter as a regular user when the truth is that they do use it. That’s why we can see that Barack Obama stopped following 386 accounts and Lady Gaga 119 accounts.

Twitter lists work as a tag in the Twitter user tracker. They are created to group users under a certain topic. It is no surprise that the Top Twitter accounts belong to different Twitter lists. Now we can see when they are added or taken out from Twitter lists.

Who has tweeted the most

Yes, that’s right, Youtube is the most active Twitter tracker. They share tons of videos and tweets each day. It is great. Among these accounts, the one that has shared the least tweets is Taylor Swift. We are huge Taylor Swift fans so 3 tweets is great for us. It is always good seeing that these accounts are active on Twitter.

Twitter analytics have a huge potential. It is about putting interest and thinking about what you need to get. Our Twitter hashtag counter does not only analyze tweets but also accounts. If you want to know more about these top twitter trackers or want to create your own, contact us and start analyzing!