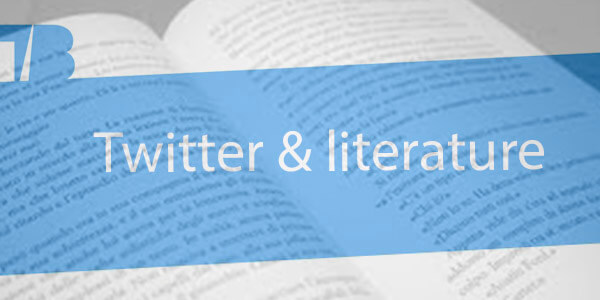 The use of Twitter is widespread. Either at the user level or as a marketing or social media professional. Also, without being any of that. Not having Twitter does not imply being oblivious to what is commented on or turned into a trend in the blue bird social network. One of the areas that Twitter has taken advantage of is literature. What’s more, universal literature. Because Twitter has not only inspired books about itself, it has also promoted new authors and also serves to carry out promotions.

As we have already seen, the potential of Twitter is enormous. Taking advantage of tweets and the capacity of the social network depends on each one. We have already published about the power of Twitter analytics. However, this time we are going to see how Twitter and literature serve each other. Because, let’s not forget, the main thing we do on Twitter is read tweets.

Regardless of whether we write long or short tweets, Twitter promotes both writing and reading. Okay, this is a statement that deserves a long development. But that starting point helps us peek into the literary profiles of Twitter. Because there are different types and because they bring together hundreds of thousands of followers.

In fact, there are social networks of literature. In fact, Twitter and literature have a key profile in English such as @goodreads. This complete Twitter profile not only publishes current affairs in the literary world. It also offers lists of key literary elements such as:

Moreover, another interesting niche is the profiles that without being specialized promote reading. These Twitter accounts share opinions about readings, raffle books, create community …

Another way that Twitter and literature have come together is through Twitter threads. First, what is a Twitter thread? This is how they explain it on their blog:

Sometimes we need more than one Tweet to express ourselves.  A thread on Twitter is a series of connected Tweets from one person. With a thread you can provide additional context, an update, or an extended point by connecting multiple Tweets together.

The literary world has taken this further. Promoting the dissemination of stories in the form of threads. In fact, several Yarn Fairs have been held. An action that promotes the writing and publication of your own stories through tweets. In addition, on Twitter itself we can use the Twitter advanced search to locate tweets from authors that interest us. For example, if we want to see the tweets sent by JK Rowling about The Ickabog, we will search: from:jk_rowling TheIckabog

She even tweeted a little thread with the book that she published with the draws she received.

Just received my first published copy of #TheIckabog! The winners’ illustrations bring the story alive even more beautifully than I’d imagined. Thank you to EVERYONE who sent in pictures. You reminded me just how much I love writing for young people. 💚🍄 1/2 pic.twitter.com/hsDdZO3PUf

This is another example of how, thanks to Twitter and the networks, authors reach out to their fans and carry out a project. Another would be how readers, through their support and publications, get books to make the leap to the screen. For this reason, having or knowing Twitter analysis tools, such as Tweet Binder, helps to know what is said about books or authors.

Until a few years ago, publishers and, in general, companies valued financial results above all. We are not going to be the ones who detract from billing as an important engine or index. However, social networks have included new metrics that are taken into account. Because an author who works in networks may not sell much, but he does create a faithful community; it will probably be reflected in sales.

For example, analyzing the data from #BannedBooksWeek (big fans of @StrandBook Store fans and of the hashtags they shared), we detected this interesting data:

That is, thanks to a Twitter report, we find relevant information. The Tweet Binder reports include general statistics, user rankings, top tweets … As well as exclusive Twitter metrics such as: the economic value of the hashtag and the sentiment analysis of the tweets. In fact, we also know from the report that the hashtag #BOOKSUNITEUS was used in 1,400 of the analyzed tweets.

If you are up to date on editorial phenomena, you will know who Reese Witherspoon is. Or, at least, it will sound familiar to you. In fact, if you are a user of a video platform, too. Or it may sound like Legally Blonde. How ironic, Reese became famous for the adaptation of a series of books into films. No matter how, why is simple: their book club is one of the most famous and with the greatest impact on social networks. In fact, thanks to its #ReesesBookClub hashtag, many books are read and new readers are won. And, even more, his production company (Hello Sunshine) is adapting books in series and film format. Haven’t you read or seen Little Fires Everywhere yet?

Well, what you can do is check, thanks to a Twitter historical report, the path that #ReesesBookClub already takes on Twitter. Thanks to it we have discovered that on Twitter:

Excited to share my Feb pick for #ReesesBookClub x @hellosunshine: #TheProposal by @thebestjasmine! It starts with a proposal in front of a crowd at Dodger Stadium 😂⚾️💍 But it’s not exactly #loveandbaseball for Nikole (who says no!)… can’t wait for y’all to read this one! 😍 pic.twitter.com/rOWVhosH5R

That is, a comment on Twitter. A mention of your company. And the fans, from their Twitter accounts, being their biggest speaker and support. Nor do you need millions of tweets to run a great campaign. Yes, you need a good community and Twitter’s about literature is usually one of the best. As #ReesesBookClub proves.

To say that Twitter is a new type of literature may be too much. What there is no doubt is that the literary field is writing new pages thanks to Twitter. Discover authors, reach more readers, promote reading … Twitter and literature are on the right track, let’s not let anything escape us. Let’s analyze and discover the tweets and accounts to follow. And, of course, above all: let’s keep reading.