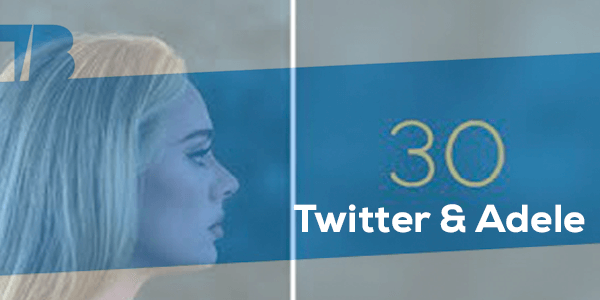 No matters if you are an Adele fan or not, you might know by now that she’s back. The one and only Adele has comeback after years since her last album or appearance. We already have published about how artists can take advantage of Twitter data. There are plenty of popular hashtags related to albums, concerts or shows well known by now. Hello, #Coachella!

Adele’s albums always have a personal signature. It is undeniable that she is one of the most praised artists in the UK. Well, hold on, in the world. Her previous albums were named after her age, it is now time for: Adele’s ’30’. The world is eager to get to know more about this album and Twitter has made sure Adele knows it. Let’s see how Twitter and Adele work together. Let’s set fire to the rain in order to come up with 30 Twitter facts about @Adele.

So, let’s focus on the main topic of the post. 30 is the name of Adele’s new album, we are going to give you 30 Twitter data about Adele:

2. This is the very first tweet ever shared by @Adele:

Adele has a new blog up at her website. Check it out here: http://bit.ly/adeleblog1

Easy On Me – October 15 pic.twitter.com/7HRvxAfEqy

5. From those tweets: 305 are original tweets and 35 retweets

7. @Adele’s tweets have received over 2.3M retweets in total

8. Ii is also remarkable the total number of likes her tweets have received: over 10M likes

11. The most used device to tweet from @Adele’s handle is an iPhone (145 tweets)

12. @vevo & @drop4drop are the most mentioned accounts by @Adele

15. 185 is the total number of tweets already posted by @AdeleAccess

20. Adele’s comeback has been announced as the biggest debut of the year in the US:

22. @MTV is the most popular Twitter user in the #Adele30 analysis

23. Whereas #AdeleOneNightOnly has now over 19K original tweets

.@adele had us at hello! @lizzo what concert are we going to next?! 🤣🤣🤣 #AdeleOneNightOnly pic.twitter.com/uLBWHGclkw

27. Being this one the most liked and most retweeted tweet with that hashtag:

Adele was surprised by her English teacher and burst into tears. #AnAudienceWithAdele pic.twitter.com/cBbh6ewbjX

28. Adele’s Twitter profile includes a link to adele.com and that link is present in over 20K original tweets

29. This is most retweeted ever tweet sent to @Adele:

Extra:  This is the top tweet about “Easy on me”:

Adele and the power of hashtags

Thanks to Tweet Binder and its reports we can analyze everything. We know every data and number linked to a trend or a Twitter handle. That is why we have been able to get all those Twitter facts about @Adele.

On the one hand, the magical concert Adele performed in LA backed up by #AdeleOneNightOnly was a total success. Not only for the amazing performances, the unique moments it implied (who does not want to be proposed to at an Adele’s concert) but also thanks to the interview the artist did with Oprah. On the other hand, thanks to the recent #AnAudienceWithAdele outstanding event. Hometown glory or the UK glory what a night! The hashtag reached almost 140M potential Twitter users with nearly 14K original tweets analyzed (no retweets counted).

In fact, Adele’s Twitter numbers are quite impressive. She has almost 27 million followers. Her account is part of almost 29K Twitter lists and her Twitter market value is close to 45K USD. And all of that just by sharing 340 tweets: 35 from those are retweets and 305 original ones.

In fact, the new album was announced after a year of silence from Adele’s Twitter account. Thanks to a short and clear tweet we all became aware of the great news: she was coming back. Not only with that tweet, but also with a kind of support Twitter handle. Thanks to a Twitter user report we know the @AdeleAccess was created the 2nd of February this year. However, it stayed silent until the 13th of October. Just with a “hello” (from the other side of Adele’s secondary account) the account became noticeable:

We can’t stop, won’t stop analyzing Twitter data as we listen  to ’30’. Oh my God, how amazing is to analyze tweets about Adele and to read her tweets. As we do not know how to write you a lovesong, we await you in the search box in case you need any tweet or Twitter custom service: