The Super Bowl is one of the majors sportive events in the world. Back in 2015 we analyzed the impact of the that year’s edition but from a different perspective: how advertisers used it to gain exposure on Twitter. The Super Bowl final is a global event and a huge chance to create a notable Twitter campaign that can live in the memories of users for ever (or at least until they buy/consume the product). We analyzed the commercials that took part, with a hashtag or not, on the #SB50 final.

We compared the Twitter impressions (impacts) of each commercial. It is important to know that the exposure here is the key because the advertisers have only a few seconds to captivate their audience and the more impacts the better. Impacts or impressions are calculated by multiplying the number of tweets sent by each users per the number of followers he has, that way we calculate the number of impacts by each user; then we add the impacts of each user and get the final impressions (impacts) number. It seems like a very complicated thing, but Tweet Binder does it in mili-seconds.

By the way, Denver Broncos won. 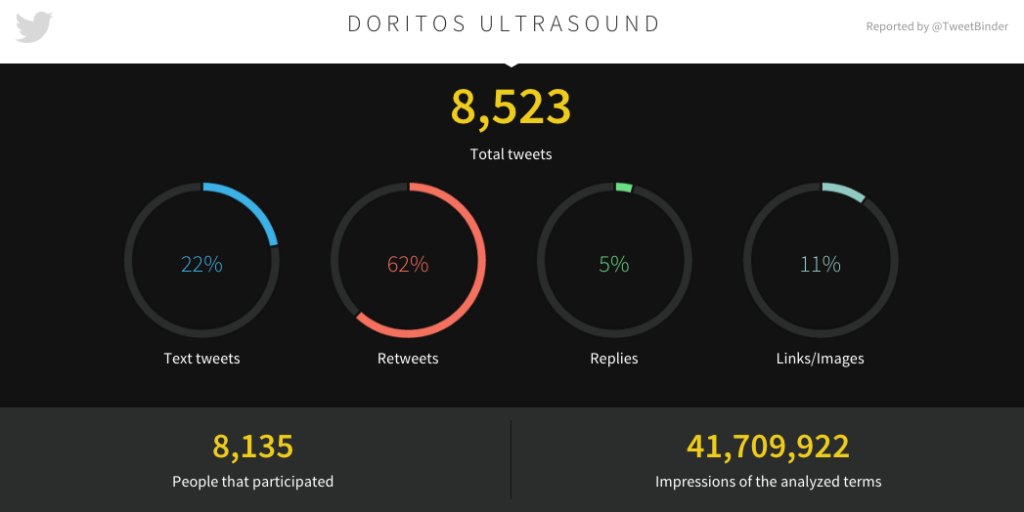 So, besides Denver Broncos, who’s the winner? Well Hyundai was the brand with the highest exposure, that’s for sure: 168 millions of impacts.

T-Mobile was the one who got less impacts although more tweets than Snickers. However, it is interesting to see that being a great brand on Twitter and getting more tweets does not get you the highest impact. Let’s see Coca-Cola VS Hyundai for instance:

Coca-Cola has 10 times more followers and did actively tweeted during the game: 8 tweets. Hyundai only once:

Hyundai didn’t have it easy to win, but they did. They did an ad that made people share it gaining more impacts than other brands and becoming the real winner of the 50th Super Bowl! Also, and very important, although commercials and stats are unpredictable, using a hashtag to unify the conversation is essential. Impressions here are potential but they help to find out who did it best last night. For more hashtag tracking case studies or complete Twitter reports: www.tweetbinder.com or email us.